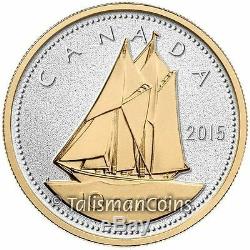 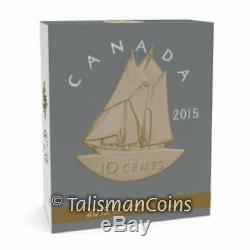 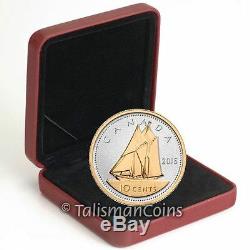 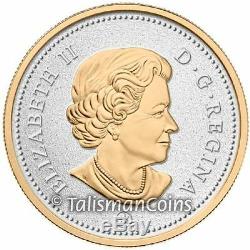 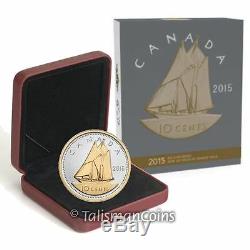 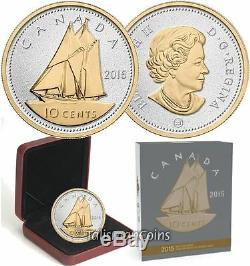 In the incredibly popular Big Coins series, and THE ONLY 5 OUNCE BLUENOSE SCHOONER DIME IN CANADIAN HISTORY! Get all six circulating Canadian denominations, minted in five troy ounces of pure silver with proof finish and 24-karat gold plating. Extremely low mintage, too - only 1,500! The Royal Canadian Mint strikes again!

Now we're livin' large! Here's your unique opportunity to acquire each of the current six circulating denominations of Canadian coinage - except blown up to monster size! Celebrate the history and artistry of Canadian circulation coinage, in a larger version - the better to enjoy these storied designs in all their glory! Each beautiful proof is minted in five troy ounces. Of pure silver and features selective 24-karat gold plating on both the obverse and reverse!

This is the first and only five ounce silver dime (Bluenose Schooner or otherwise) in Canadian history! We can not stress strongly enough what an opportunity this is! We believe that this landmark coin will become a numismatic delicacy, greedily pursued by future generations! The mintage limit is low, so grab yours now! Collect ALL the Big Coins 5 Oz Silver Proofs.

Was built and launched in Lunenburg, Nova Scotia in 1921 to compete for that trophy. It won and remained unbeaten for 18 years! The design honoring this winning schooner was created by Canadian artist Emanuel Hahn. The coin itself was minted in silver from 1937 to 1968, then in nickel from 1968 to 2001, when it was changed to nickel-plated steel.

Has become one of the national icons of Canada, along with the beaver. This big silver proof features. An historic fishing and racing schooner launched at Lunenburg, Nova Scotia on March 26, 1921.

In October of that year. Won her first of many International Fishermens Trophy series of races.

Went on to serve actively as a fishing vessel. Roué, and her stalwart crew under Captain Angus Walters, became known and admired around the world. When the global economy faced stormy waters in the 1930s. Increasingly served as a cultural and tourism promotion vessel. Was launched in 1963 and gifted to the Government of Nova Scotia in 1971.

Continues to serve as a goodwill ambassador for Nova Scotia and all of Canada. Here's a coin with a ton of investment potential, to say nothing of cachet! It's huge (nearly 3 inches in diameter) and stuck in the purest silver. Refined anywhere in the world.

The numismatic circulating coin theme is extremely popular, too! Then there's that extremely low mintage limit - only 1,500! Don't let it sell out on you, get yours today! The Royal Canadian Mint refines the purest silver in the world.

This five troy ounce silver coin. Schooner design was created by Canadian artist Emanuel Hahn and first used on Canadian legal tender ten cent coinage in 1937. The date of issue and denomination also appear. Her Majesty, Queen Elizabeth II. This portrait, the fourth effigy of the queen to appear on Canadian Coinage, was executed by the artist Susanna Blunt.

The legend reads ELIZABETH II D. REGINA ("Elizabeth II, Queen by the Grace of God"). The coin is encapsulated inside a burgundy leatherette, clamshell-style presentation case, lined with black velvet and protected by a full color, custom cardboard box. An individually-numbered certificate of authenticity is included.

Proof with 24-Karat Gold Plating. The item "Canada 2015 Big Coins Series Bluenose 10 Cents 5 Oz Silver Proof Gold Plated OGP" is in sale since Wednesday, July 29, 2015. This item is in the category "Coins & Paper Money\Coins\ Canada\Commemorative". The seller is "talismancoins" and is located in Saint Louis, Missouri.