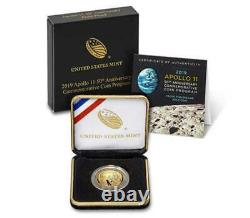 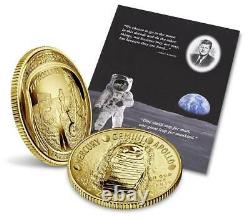 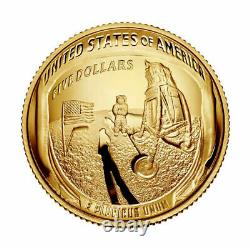 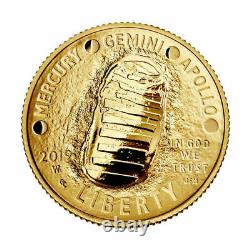 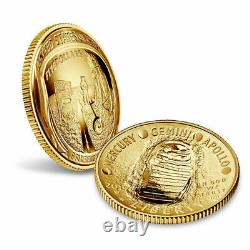 The United States Mint is proud to present the Apollo 11 50th Anniversary Commemorative Coin Program to celebrate the first manned Moon landing on July 20, 1969, and the efforts of the United States space program leading up to this historic event. All coins share common designs and are curved. Obverse: This design features the inscriptions "MERCURY, " "GEMINI, " and "APOLLO, " separated by phases of the Moon, and a footprint on the lunar surface, which together represent the efforts of the United States space program leading up to the first manned Moon landing. Additional inscriptions include "2019, " "IN GOD WE TRUST, " and LIBERTY. Reverse: This design features a representation of a close-up of the famous "Buzz Aldrin on the Moon" photograph taken July 20, 1969, that shows just the visor and part of the helmet of astronaut Buzz Aldrin. The reflection in Buzz Aldrin's helmet includes astronaut Neil Armstrong, the United States flag, and the lunar lander. Inscriptions include "UNITED STATES OF AMERICA, " "FIVE DOLLARS, " and E PLURIBUS UNUM. Half of the total is authorized to be paid to the Smithsonian National Air and Space Museum's "Destination Moon" exhibit; one quarter to the Astronauts Memorial Foundation; and one quarter to the Astronauts Scholarship Foundation.

Coins minted to celebrate the first manned Moon landing. Minted at the West Point Mint. Accompanied by a Certificate of Authenticity together with all original packaging. This item is in the category "Coins & Paper Money\Coins: US\Commemorative\Modern Gold (1984-Now)".

The seller is "elitecoinage" and is located in this country: US. This item can be shipped to United States. Mint